The U.S. transmission grid is facing the unprecedented challenge
of a shifting generation portfolio from massive additions of
intermittent renewable energy.

However, there is a serious issue regarding transmission
expansion plans: The process of building new generation happens
much faster than building new transmission. This means that
attempts to alleviate congestion or deliver power to a new area can
sometimes have unintended consequences.

Ameren’s new 100-mile, 345-kV transmission line in the region
overseen by Midcontinent Independent System Operator grid
operator, dubbed the Mark Twain Transmission Project, is the latest
example of the challenges RTOs face when it comes to the shifting
grid in the Midwest. 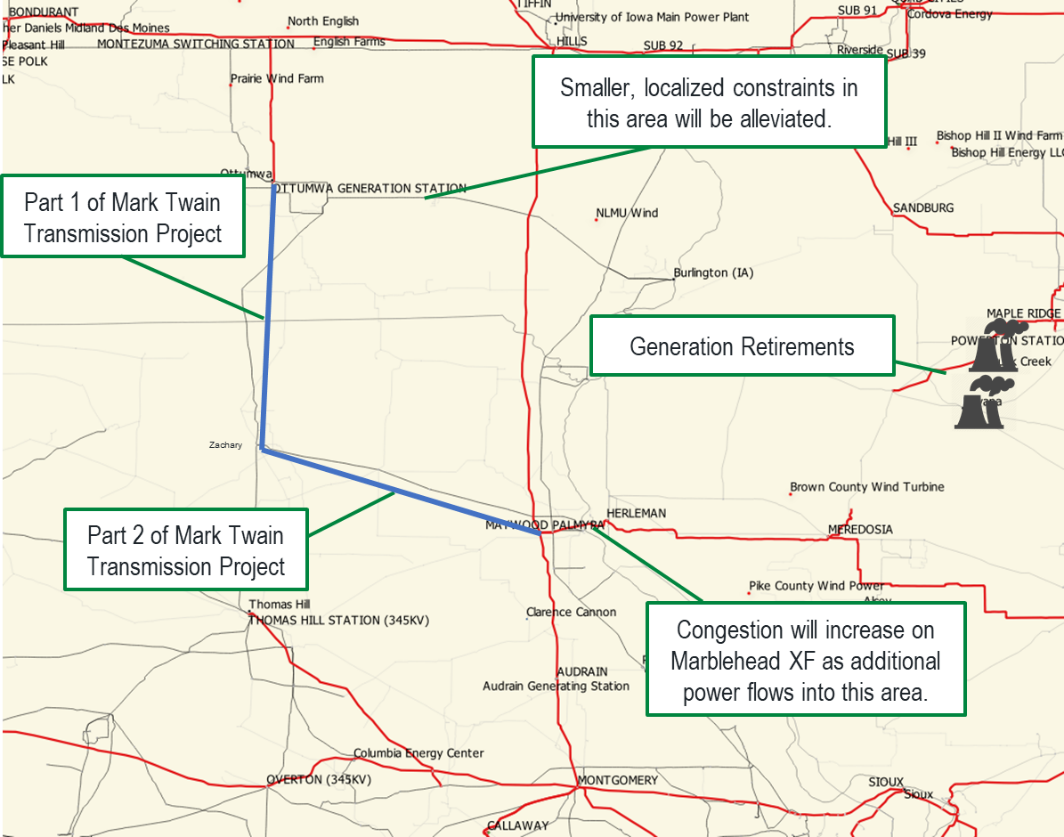 Mark Twain was conceived to allow more wind capacity from Iowa
and Missouri to travel east into Illinois at the Marblehead
transformer. Wind farms in the area had been injecting zero
marginal cost power into the grid near Palmyra and causing new
patterns of transmission congestion. Ameren began construction on
the line in May 2018 and it officially went into service on
December 19, 2019.

The Marblehead transformer is one of the top constraints in
MISO, located in part of the grid that bottlenecks the amount of
wind generation that can flow from Iowa and Missouri into
Illinois.

The addition of the Mark Twain line also happens to coincide
with the retirements of four Illinois coal plants totaling over 2
gigawatts of capacity: Coffeen, Havana, Hennepin, and Duck Creek.
Those retirements happened in August 2019, and the final plant,
Duck Creek, retired on December 13 — just days before the new
line was scheduled to going into service.

The latter three of those plants provided reactive power to the
Marblehead transformer. With the retirement of these plants, the
grid is poised to be thrown out of balance as additional power
flows over those lines and directly through the Marblehead
transformer.

On high wind days in Iowa and Missouri, power from new wind
capacity in the region will flow toward Marblehead via the new
line — making the bottleneck worse and causing congestion. In
other words, rapid wind development since 2011, combined with the
retirement of several major coal plants, means the new Mark Twain
project will cause additional congestion at Marblehead even as it
eases congestion issues near Palmyra.

The increased congestion will result in large price
discrepancies between locations, disincentivizing new wind farm
development in Iowa and Missouri and causing a less efficient
dispatch of generation.

Upgrades similar to the Mark Twain project are necessary to

allow new wind power in rural areas to efficiently reach large
cities where it is needed.

However, this project illustrates the difficulties of
maintaining an efficient and reliable grid in the face of rapidly
expanding intermittent wind and solar capacity. RTOs operate a
competitive market, and as new low-cost wind, solar, and gas
generation continue to price out older more expensive coal
generation, flow patterns and congestion will continue to
change.

Meanwhile, storage and smart grid technology continue to
advance, which may alleviate the need to build out certain
transmission expansions. Planning for new transmission must take
these changes into account.

Operator Profile: Out of the Woods

BART up the Peninsula? Horrible idea, they say: Roadshow