Unexpectedly rapid growth in solar markets like Florida and
Texas is driving up expectations for U.S. solar installations, with
Wood Mackenzie Power & Renewables now forecasting more than 13
gigawatts of capacity additions in 2019.

That sets the U.S. solar market up for 25 percent growth
compared to last year’s 10.6 gigawatts, in what would be its second
biggest year of all time, according to the latest U.S. Solar Market
Insight Report from Wood Mackenzie and the Solar Energy Industries
Association (SEIA).

Since last quarter, announced solar procurements and shifts in
the market have led WoodMac to increase its forecast for 2019
utility-scale installations by 1.2 gigawatts, and by 5.1 gigawatts
for the 2019-24 period.

Texas accounts for much of the increased forecast for this year,
while Florida has driven the five-year boost thanks to ambitious
solar growth plans at utilities including NextEra Energy’s Florida
Power & Light and Duke Energy Florida. Last month Florida Power
& Light announced the start of construction on 10 new solar
plants totaling more than 700 megawatts, as the economics of solar
in the Sunshine State look increasingly favorable against gas-fired
generation.

The U.S. solar market pulled back sharply after its peak year in
2016, but it’s climbing rapidly once again as costs fall and
developers move to take advantage of the investment tax credit’s
(ITC) phasedown.

Over a longer time horizon, solar is expected to benefit from
its increasing competitiveness against wind energy in a growing
number of central U.S. states where wind has long been the dominant
source of new renewables capacity. The wind industry’s production
tax credit is phasing down more rapidly than solar’s ITC, and
unlike the PTC, which is on its way to zero, the ITC is scheduled
to stop phasing down indefinitely at 10 percent for commercially
owned projects.

By the mid-2020s, WoodMac expects utility-scale solar to be
cheaper than wind on a levelized cost basis in a number of states
within grids operated by the Midcontinent Independent System
Operator and the Southwest Power Pool — including Illinois, Iowa,
Kansas, Michigan and the Dakotas.

Total installed solar capacity is expected to more than double
over the coming five-year boom period, cresting at 16.4 gigawatts
in 2021 as the ITC phases down, WoodMac predicts. Solar developers
are in the process of finalizing their strategies for maximizing
the ITC, as wind developers did several years ago for the PTC. 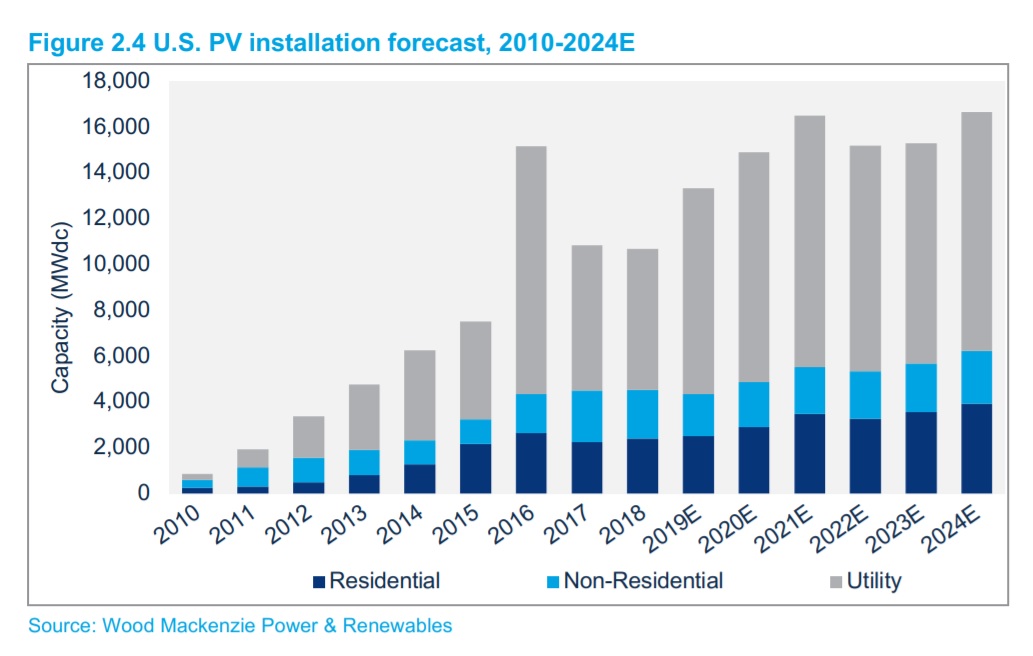 Other highlights from the report include:

While utility-scale projects remain the market’s primary
driver, accounting for 61 percent of U.S. installations in the
first quarter, the residential market continues its rebound. The
residential market crumpled after one-time national leader
SolarCity (now Tesla) fell on hard times and reined in its
aggressive growth strategy, but the market has since stabilized —
installing 603 megawatts during Q1, up 6 percent year on year.

Weak growth in former powerhouse markets like California and the
Northeast is being offset by strength in “emerging” state
markets like, once again, Florida and Texas. Nearly one-third of
new residential capacity during the first quarter came from markets
outside the top 10 in cumulative capacity — the highest share
ever.

WoodMac forecasts growth in the residential market of 5 to 20
percent during the 2019-21 period, pointing to drivers like
Maryland’s renewable portfolio standard increase, the removal of
South Carolina’s net metering cap, and Illinois’ Adjustable
Block Program as new tailwind. And California’s home solar
mandate will begin fueling the market there beginning in 2020.

In contrast, non-residential installations continue to struggle,
with 438 megawatts put in place during the first quarter, down 18
percent from last year. But WoodMac expects the non-residential
market to see a modest rebound over the next few years as community
solar programs takes off in states like New York, Maryland and New
Jersey.

At least 4 dead in mid-air seaplane crash in Alaska, but 10 survive